Published in the July / August 2014 Issue of LA Canvas

To understand what Twitter, universal connectedness, psychomagic, and rave culture have in common, one can simply sit down with recent Los Angeles transplants Samuel Borkson and Arturo Sandoval III. The two are the pair behind the art collective FriendsWithYou, whose dream is to connect humanity one project at a time. Their style is Murakami-esque and poppy – they often create immersive installations starring pattern draped and personified geometric inflatables. Yet, they insist that no medium is of the table, their previous work takes the form of plush doll, large installations, screen prints, and paintings, but the two are currently working on apps and television series, alongside more traditional commissioned pieces.

When I got to the FWY studio, Sam was waiting for me on a large straw mat, shoes off, and pizza patterned socks on display. As Arturo, or “Turi” walked over, also barefoot, they said I could remove my shoes, and take a seat with them. After biking to their studio sans socks, I was a little worried to oblige, but after talking with the collaborative pair, I realised that the mat (smelly feet and all) was a potent symbol for their dual creative process. Taking in the good with the bad, the pair transform conventional dualities into experiential happenings, in hopes to proport their message of connectedness and well-being.

While I am a generally positive and optimistic person, I do possess a hint of skeptic – perhaps from reading too much critical theory during grad school. Yet, FWY cut through my skepticism regarding their seemingly naive goals – for, their optimism is strongly rooted in realism. While it’s simple to be cynical about the often maddening state of our capitalist culture, which is brooding individualistic corporations, FWY simply acknowledge it, and then move on. They’d rather spend their time thinking about the positive. They think cute is punk. Here’s Turi:

“The whole idea of modern culture and systems we have in place to monetize and incentivize, are based on a systematical bracketing of ourselves. They are also simmering down into predictable and limiting ways, and these things can be exploited. We decided early on that we would flow with the capitalistic system to see how it can work for us, and let the ideas flourish…There’s no accepting the capitalist system–you’re just in it. Take the thing and shift it to your purpose. Change it from within, and to some degree try to move the needle one way or another. I think that is in some ways more progressive that totally going off the grid, and boycotting the whole thing.”

“I’m assuming you guys are optimists?” I asked. “I am Optimist Prime!” Sam responded. “OMG. that’s the best tweet ever. I have to tweet that right now. DUDE.” While Sam updated his Twitter status to our new pun creation, Turi responded, “we are realists at the same time. We know that we have a long way to go as people. We understand the pain of it, but we are just being the symbol of hope and happiness and acceptance. Well, we are trying..”

Optimists, but not blind ones. The two have clearly worked hard to establish their reputation and credibility. They strive for balance – internally, but also in their collaborative relationship. They don’t always see eye to eye, but that’s what makes collaboration such a fertile zone. Moving past their individual egos into seeing themselves in the other, their practice allows space for a dialogue to occur. Arturo, or “Turi” as Sam refers to him, told me that “part of making art is about generating something that is beyond you. Its the same thing with our relationship. We have found honesty in each other. that’s where our most beautiful art has flowed from. We never have the problem where we don’t have in ideas. We always have 5 ideas, and the problem is deciding which one to make.”

Sam and Turo met in Miami, while both part of the rave culture in the 90’s. Their group of friends at the time embraced silliness, and dancing, and offered the two unequivocal support in the beginning inklings of their collaborative efforts. Their first joint project was creating a series of plush toys – Sam had asked for a sewing machine for his high school graduation. “We didn’t know about the art world,” Sam confessed to me. “We came and just Mad Max-ed this thing.”

Coincidentally, their early stages of collaboration happened alongside the beginnings of the internet, providing a global platform and experimental lounge for the two. Turi described their first projects as website 1.0. “I had like rotating logos and gifs all over that shit,” laughed Sam. With the support of their local community, good timing, and a bit of luck, FWY was able to establish a presence, and grow into what it is today.

The two re-located to Los Angeles last year to expand their horizons, and take advantage of the creative energy that proliferates in The City of Angels. They explained the broadcasting tool that LA has become – proliferated by the movie industry–strongly attracted them to the city. There is an opportunity here to reach an expanded audience, beyond a regional one in Miami. While FWY doesn’t align with any specific religion, they constantly talk about the spiritual and the psychic. Los Angeles’s unique blend of cultures and demographics surely speaks to FWY’s blend of spirituality: “a kinda Buddhist, Christian, Jewish, African, Tribal mix. Just a happy with yourself kind of thing.”

With a Los Angeles based solo show at Marine Projects and a MOCA book release party for their newly released monograph under their belt, Sam and Turi are off to a good start as newly minted Angelenos. The comprehensive monograph, We are Friends With You, which includes the 12 year oeuvre of the team’s projects, features essays by Pharrell Williams, Alejandro Jodorowksy and Peter Doroshenko. I’m just saying. Perhaps the book is symbolic: the pair feel the freedom to close a literal chapter on some of their previous aesthetics, and dwell within some new terrain. Turi explained, “the new work is a continuation of the vibration of the old work.”

Universal Reversal, was on exhibit from March 22nd to May 31st in the bedroom space at Marine Room. One can see a clear shift, from cute personified shapes into a more ethereal approach to an immersive environment. Color and pattern can still be found, but the space presents a more meditative cerebral approach to personal discovery, as opposed to previous more straight forward installations. The new work is challenging and quiet. “If we were trying to build an art career, we would have just kept doing [work in our older style],” Turi explained. “But we’re not just harvesting our career, we are trying to get to something else.” 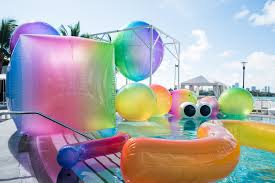 By something else, Turi means global happiness, peace, self acceptance, and love. A lot to accomplish in one lifetime, but the pair are realistic about their lofty intentions. Dreamers, yet still grounded in the messiness of modern life. He explains further, “Its not that you are just an artist. You are a human first, then beyond that you are some cosmic arrangement of atoms. but then beyond that there are layers, and you have this social role to play.”

As humans, we strive for connectivity. Historically religions have used symbols to accomplish this, and allow for a totem to focus on to mentally align a group of people. Islamic geometries, the Christian cross, the Jewish star. These historic symbols are also the basis for Jodorowsky’s theory of psychomagic – one in which objects are used to harness psychotherapy, allowing for psychic focus of a problem into a physical talisman. FWY’s Psychic Stones are in direct response to this theory. “There’s a need to have connection. we’re not a blue whale that can be in isolation for a decade. We are social beings that need interaction. all these experiments are us trying to leave our own ego consciousness and and move towards connections with others.”

As FWY foray into the future, working towards enlightenment, balancing internal energies, and managing their prolific idea base, they remain uncertain about which direction the work will take, yet committed to the flow of ideas. “What’s next?” I asked in closing. “Lunch,” Turi answered.

One step at a time.